With the new year 2013 comes the final tweak of my Freight Train V recipe.  I have taken this one many directions as I have learned about brewing.  Because of the use of darker malts spices I have learned about scale and proportions and how to brew with darker malts only taking advantage of the positive traits and minimizing the negative ones.  For my final version I decided to steep the darker grains and spices rather than include in the mash with the base malt.  The procedure is influenced by my studies coupled with some ideas of my own.  During the Mash Out where I re-circulate the wort prior to draining into the brew pot I used a pitcher full of wort and steeped the grains and spices in a grain bag directly into the pitcher.  While sparging I let the grains steep and then placed the grain bag into the brew pot until it reached 170 degrees.  I then removed the grain bag and proceeded with the boil.  My hopes are that this pulled the aroma and flavors out with out the astringent characters of darker grains. 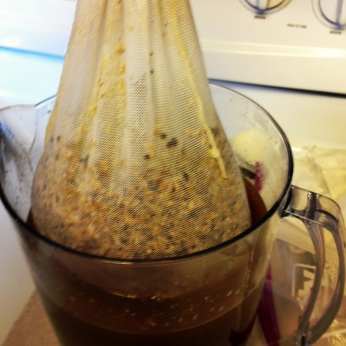 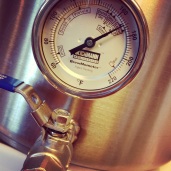 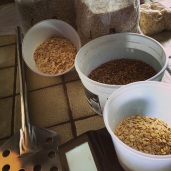 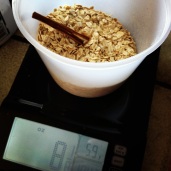 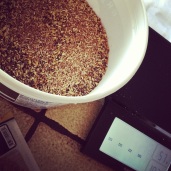 For the first time I went with American Ale as opposed to California Ale and British Ale to get a better understanding of the differences.  FTIII took the beer a more British style but I really am partial to a hoppier experience.  So the goal her is to balance a hoppier beer with the malt character plus a little pizzaz.  I liken this custom recipe I developed to a “Frontier Ale” in that I used a spice famous during the wild west days.  FTV will be my amber offering but with a memorable aroma and flavor.  As of today it’s been in the fermenter almost one week.  I will next transfer to a secondary and dry hop with Palisades hops like the previous versions.