Craft Brewer Whitelaw Reid pays tribute to important people by creating a beer that represents their heritage and persona.  Family member Wolfgang Seidl realized his dream by immigrating to the US from Germany in 1928.  Before departing a group of eight men made a pact to help one another get to the new world.  One at a time they all made it and reflect on the “Bund der acht” (band of eight) through their lives.  Seidl settled in Buffalo, NY, worked is entire life at Iroquois Brewing Company and founded the Edelweiss Verein dancing and singing society that still exists in over seventy cities and the dancers were the Schuhplattlers.  After “researching” Iroquius brewing and the beer they made I quickly found out that it really was nothing to write home about which is clearly not representative of the German craft of brewing back in the home country.  As an avid supporter of my craft brewing adventures my Uncle Fred  (Wolgang & Annas son) requested that I abandon creating any traditional German lager and instead create a classic west coast IPA with hops galore. 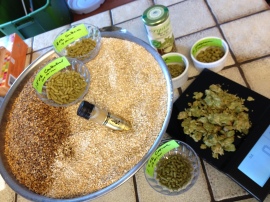 I obliged and created my own recipe that includes four varieties of hops totaling eight ounces representing the “bund der acht”. With the hop additions I added some token German hops along with Cascade, Centennial, and Chinook.  To further hoptimize the brewing process I put a Hop Rocket into play.  At the final step of the brewing process and prior to placing into the fermentation vessel I pumped the hot wort through the Hop Rocket which contained two ounces of Cascade leaf hops.  This process pulls the aroma and flavor goodness out of the hops just before the cooling process and then ultimately into the fermentation vessel.  The first stage of fermentation lasts about two weeks and I then transfer to a secondary fermentation vessel in where I add two more ounces of Cascade hops known as “Dry Hopping” .

Many months later now only two 22 oz bottles remain which are marked for the Seidl clan.  It’s been hard to pin down my vagabond Aunt Ann and Uncle Fred along with my cousins Andy and Laura and the two studs Kris and Keegan but they now have settled on Colorado.  Next step ship out the last two bottles get some feedback and brew again.  I sure hope hops are in the cards!